On this second to last day of GoWeek, we had the privilege to go out once again and directly serve the community through a mobile food pantry, this time on St. John’s Avenue, behind The Austin Stone’s Hope in the City building. Just like on Monday, we set up in a parking lot, unloaded pallets of all sorts of foods from a truck, put up tables in front of the truck, and passed out the food to a bunch of individuals and households, with a team helping people load their goods into their cars. Today was like that, but WAY bigger. Today, 205 people were served, whereas on Monday, we ended up with 78. Actually, the turnout today, though it was still great, was apparently lower than normal. Even so, we ended up handing out over 18,000 pounds of food! That’s 9 WHOLE TONS, PEOPLE!!!! That’s right, 9 tons of foods like chicken, pork, carrots, lettuce, split peas, canned fruit, cereal, corn, canned potatoes, tomato sauce, juice, and a bunch more. There was even baby formula for families with little ones. We went through cases of potatoes and tomatoes like nobody’s business! Later in the shift, in an effort to thin out leftovers, the designated amount for each person was bumped up. Initially, I gave out 1 can of potatoes and 1 can of tomato sauce to each person who came through. Eventually, that number went all the way up to 4! Bear, who was distributing fruit cups, started off with 12 for each, not to mention anyone who came with a blue sticker to show that they were picking up for either two or three families, meaning their serving would double or even triple! In short, a lot of people got a lot of food today! My favorite part of today was the kindness of the people we served. Everyone said thank you, some asked how our day was, and most offered a smile. My favorite encounters of the day were with a lady that said she was using her “best manners”, and was all excited because she just got an apartment with a great view. Her joy was was contagious, and we couldn’t help but smile while she spoke to us. Also, there was a really nice guy who came up to my station and, after asking me how my day was going, he made a point to tell me that everyone there really appreciated what we were doing, and added, “I know I sure do.” Those types of moments are what God wants us to experience and take away from serving others: realizing that, no matter how small your contribution may seem, you’re a part of brightening people’s days, of inspiring hope. Moreover, joy can dwell in anyone, no matter your current struggle. The woman using her “best manners” was so happy and energetic, and while she still has to come to the food bank for her food, she’s positive, especially now, since God worked it out so she could have an apartment. It’s a great reminder that we should always look to God, and be joyful and grateful because of how he’s blessed us. While we’re at it, we can and should share those blessings with those in need. After all, they’re just as much God’s children as we are, so don’t they deserve to be treated with love, just like us? I ask that you would pray for tomorrow, when we serve CTFB as a team for one final time, that we would remember that everything we do to help out is making a difference to someone, and it’s how God uses us to show people how He blesses them, no matter what they’re going through. Pray that we would remember the gratitude, the laughs, and the smiles we’ve received thus far, and know that we are appreciated, and that the joy we feel in this life is just a preview of what God offers those who trust in Him. Lastly, pray that our last day will be just as productive and fulfilling as the others, so we can look back on our week with satisfaction and the confidence that what we did mattered. 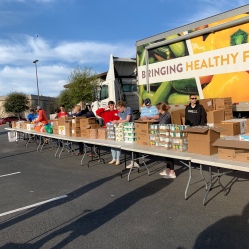