What we DID: celebrate!! We ran for victory today. Victory of serving others with the same heart that Garland Benson had as he worked hard to raise 1 million dollars for his sister’s treatment to fight Batten disease.

We FEEL: excited, capable, and strong. We’ve worked hard to serve all week and we know God has given us strength to endure.

We EXPERIENCED: community, family, and a sense of belonging. It was awesome to run with our family and friends to celebrate the spirit of serving others.

Please PRAY: for a continued heart of service among these students. Pray this week ignites their hearts to desire to serve others because we have been given everything we need through Jesus. 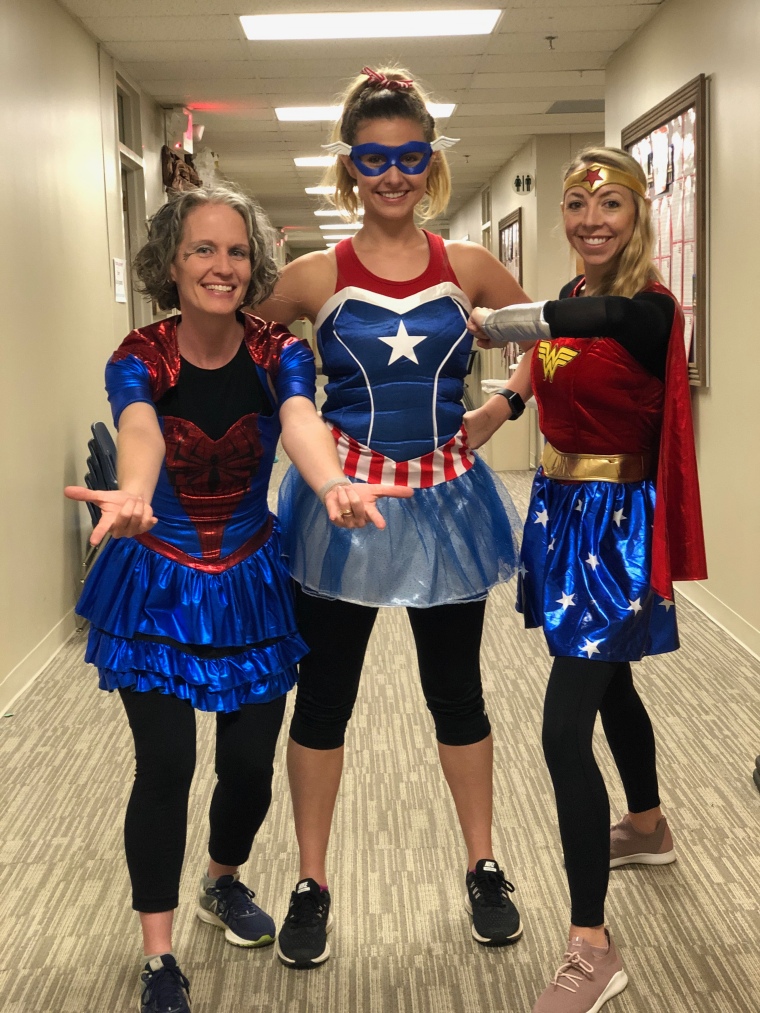 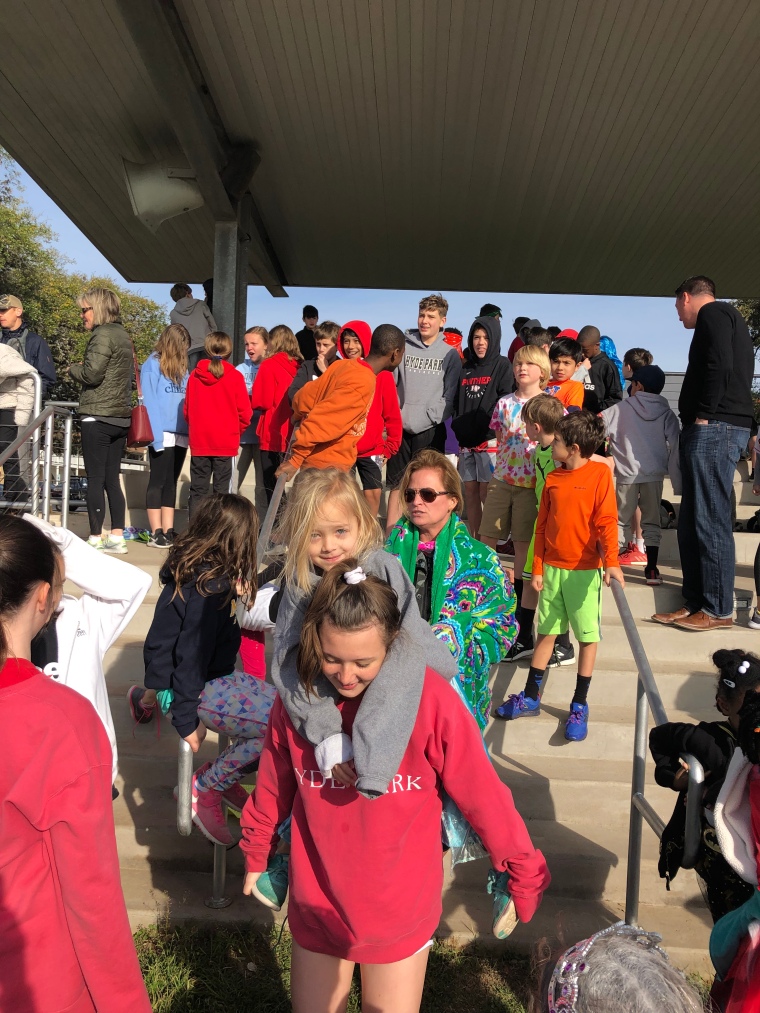 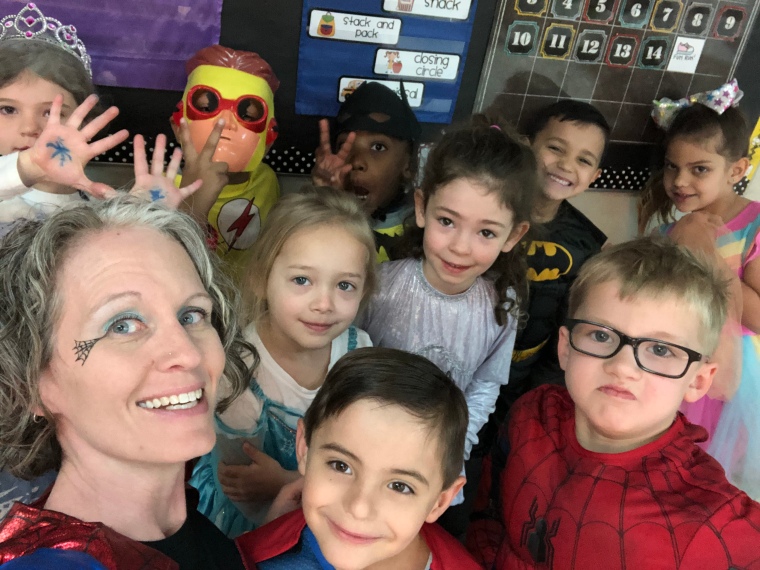 Today has been very bittersweet.

This morning, we went zip lining after breakfast then ate and shopped in Panajachel. The zip lines were so much fun! There were 7 of them that went over and through the jungle. Lunch was definitely needed to regain some energy before browsing around the countless vendors and stores.

We will be leaving at noon tomorrow, but the kids will be in school. That means that our goodbyes are happening today. We have been so blessed to work at a place like this.

Tonight was very difficult. Not only were we crying, but the kids were crying to. Goodbyes are always the hardest part of this trip. We always come here hoping to make an impact on the people of Guatemala, but without fail, they always end up impacting us too. The sweet kids and amazing people we have met here will be in our hearts for the whole year. The seniors are heartbroken that this was their final trip, but are already planning to return after they graduate. Eagle’s Nest is truly a life changing place. If you ever want to see God’s plan on action and be able to sense Him around you, visit Nido Del Aguila.

Tomorrow will be a day full of travel. I will post from the hotel at night. That will be the big photo dump, so this is the last official blog!

Most of tonight’s photos did not upload, but expect lots tomorrow night!

– For the kids to understand how much we love them

– For us to have reflective spirits upon our return home 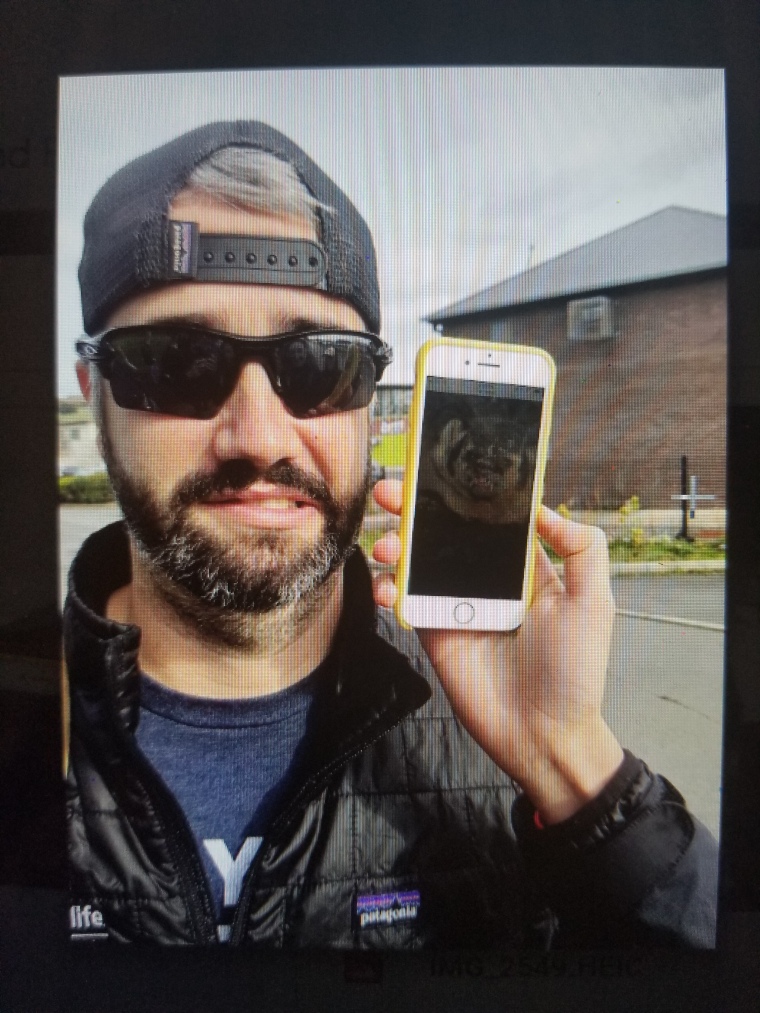 It is with great pride that I may write that as a team we have already finished a majority if not almost all of our projects! Of course, this achievement could not have been completed without vigorous work and coordination.

My apologies to the marketing team, as I have seemed to have forgotten them in my rundown of the teams. (Must’ve gotten hit too hard in the head with the VBS tree branches!) The marketing team has been hard at work revamping the church’s website, even interviewing the pastor for it. To see the work they are doing you can check it out at: https://www.tccaaustin.com

With this new day comes a new scramble of jobs as we try to wrap up what’s left of our list of things to do. Those who were power washing kept on it today, with a little bit of work left to do tomorrow. The steam cleaner itself happened to malfunction so our quest for steam cleaning all the chairs has been stopped until further notice.

Those who were painting have mainly completed the entire upstairs area! This job took a whole lot of effort and time from multiple members of our group, and having it done is quite the relief to all of us. (Except for cleaning all those paintbrushes, that took way too much time!)

The crew working on the VBS sets managed to complete both the tree and the waterfall today! (Despite having to restart the waterfall right before lunch.) I don’t think any of us want to use masking tape for a major project again, but we got our job done and are excited for what we’ll be working on tomorrow.

Finally, a group went out today to pass out flyers for the church advertising for VBS. This allowed our team to get a better glimpse into the surrounding community and form relationships as students of Hyde Park Schools.

Today’s work seemed impossible at the start, yet we came out on top. It amazes me how powerful we are as a team! As we’re wrapping up here at Congress Avenue, I thank you for keeping us in your thoughts and prayers, and ask for one for day of them!

Today, we split into two groups by job preference for the morning. One group woke up earlier and headed to do construction with Restoration Project and the second group woke up about an hour later, ate a quick breakfast, and walked to take the trolley to the shelter.

The other group went to the same house they worked on a couple days ago, but this time they tore up the floors plank by plank. After one floor was gone, they sledge-hammered for what seemed like hours. They said it was a fun way to get exercise but most importantly, to help those people restore that home for someone in need.

Once at the shelter, my group did crafts with the young moms while a few of us chose to hang out with their kids. We made picture frames with Bible verses in either Ukrainian or English and decorated them with yarn, flowers, ribbon, and drawings. When that was finished, the rest of us went to play with the kids on the second floor of the Shelter to help keep the young children busy so that the moms could rest for a few minutes. This consisted of playing mini soccer and helping the kids not get hurt while they played. It also involved chasing the “escapees” who wanted to play a not-agreed-upon Hide-N-Seek.

It was a lot of fun and when it was over, we headed to the Day Center for a wonderful lunch of fried chicken, seasoned carrots, and mashed potatoes. There we played cards, ping pong, and other games while we waited for everyone to arrive for English camp. The Ukrainian boys are all amazing at card games and ping-pong, almost always beating us without struggle. We split into two groups for English lessons, one more advanced and one more basic. I was in charge of the more advanced group and we practiced things like simple phrases, colors, the alphabet, and counting by tens. The kids had a great time and earned prizes like candy and pens.

After this, the groups rejoined and Andrey Pankyeyev, the leader and founder of Last Bell Ministries, gave a powerful message about believing in yourself. He paraphrased the story of Louis Zamperini, the famous runner whose story had been told in the Novel and eventually film of Unbroken.

Following this message, Ukrainians and Americans alike were divided into three teams for a scavenger hunt across Zhytomyr. We were required to work through the language barrier in order to emerge on top and complete embarrassing challenges in the local mall like singing a Christmas Song aloud or clapping for random people as they entered the building.

After this, we returned to the Day Center and loaded up our vans to head back to the hotel. Everyone emerged in great spirits and ready for whatever the next day brings.

Today, we helped homeless people with food tickets get their matched points and trade them in for food! We also went to Time Square and ate some Dallas BBQ!

Today, we helped a local company assort teaching and school essentials into boxes and pack them away. We also visited the Empire State Building and Time Square!

Today 3rd grade led chapel and taught us all about the Fruits of the Spirit. They did an amazing job! Our kids then participated in a cultural fair with 3rd and 5th grade. Our 4th graders designed beautiful Ukrainian Easter eggs called Pysankas. 5th grade taught us how to make a woven basket from Rwanda. 3rd grade taught us how to make a beautiful Christmas lantern called a Parol. We learned a lot! Tomorrow we will end our week with a Fun Run at Camp Mabry! 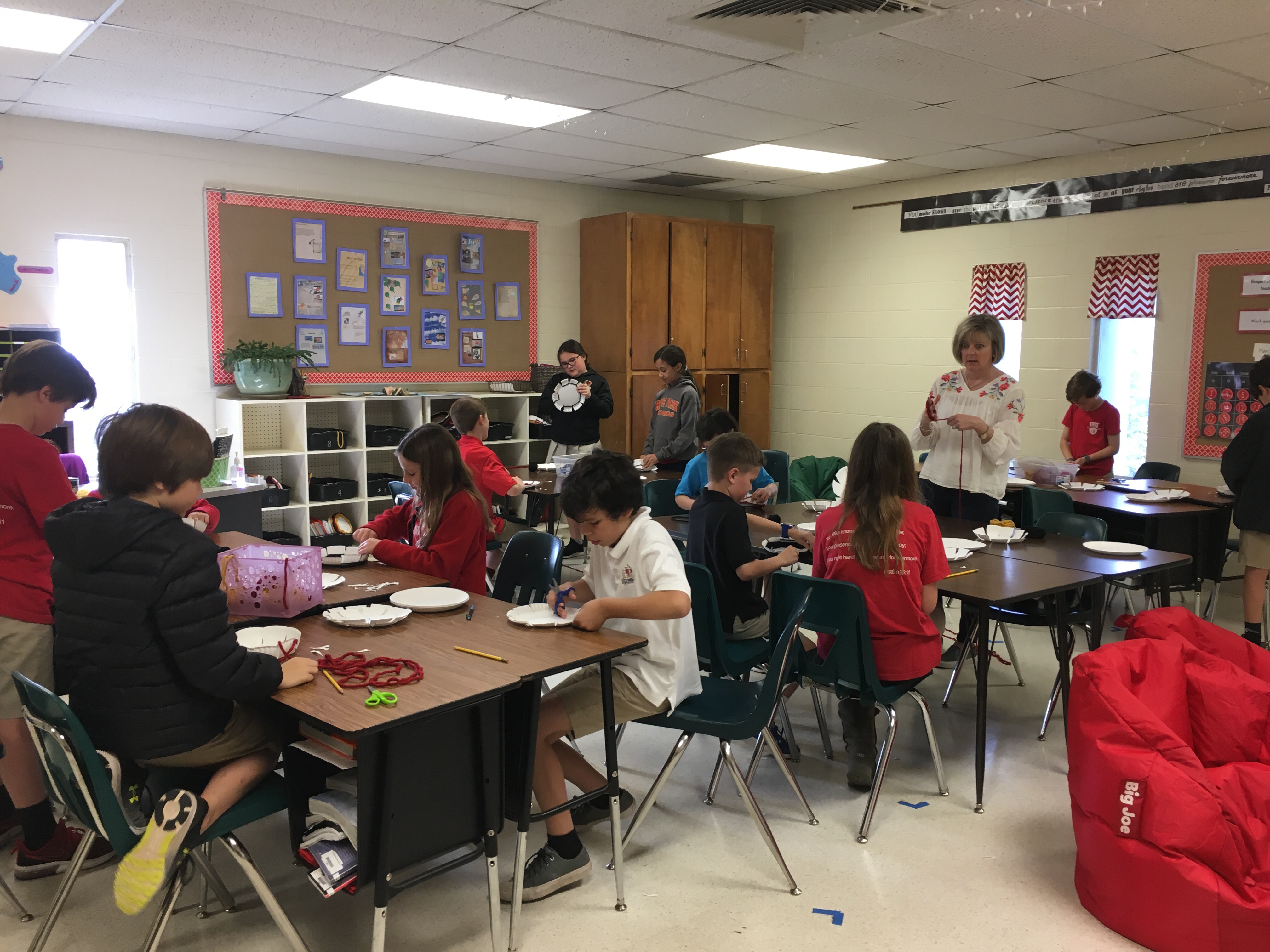 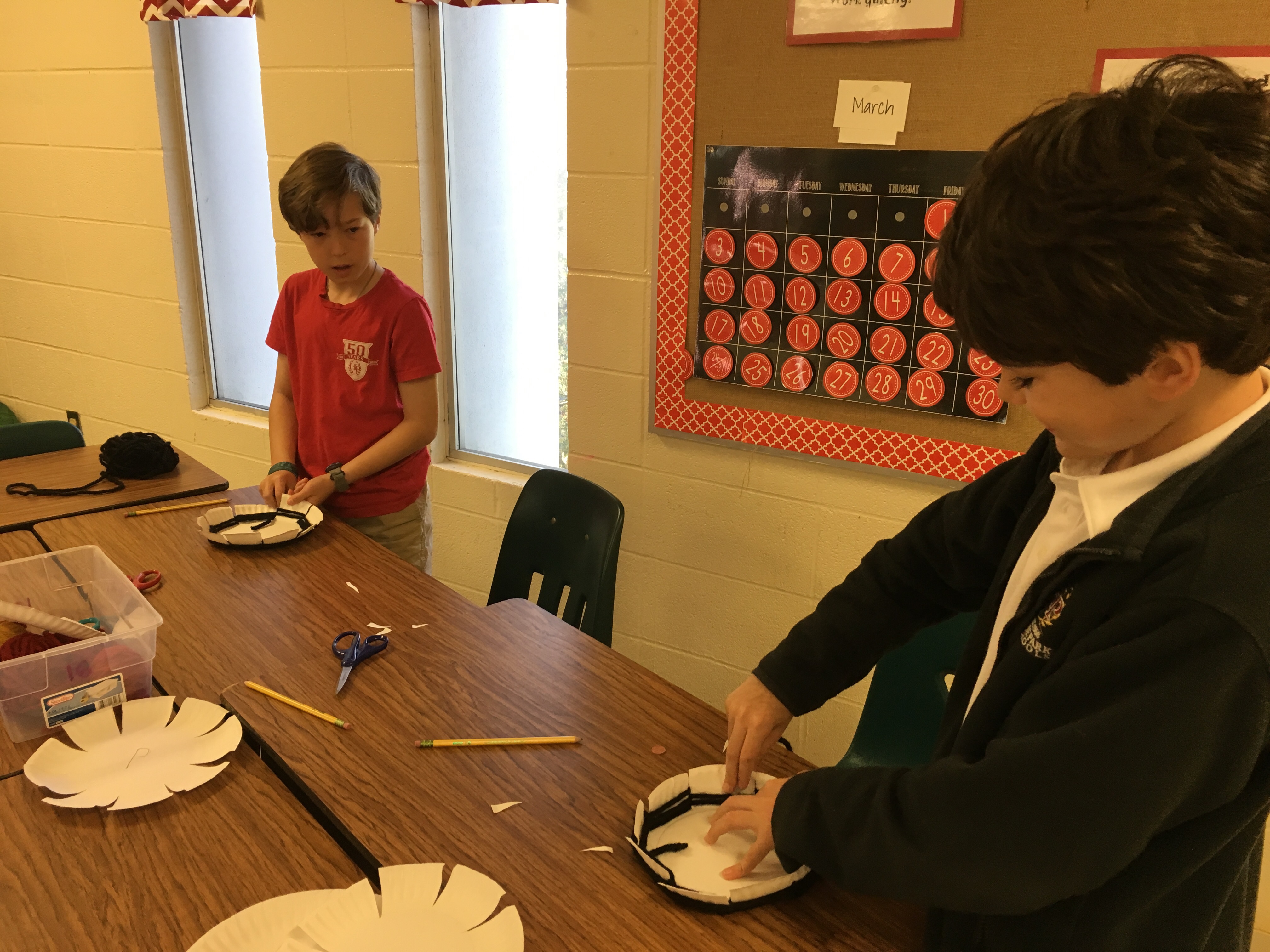 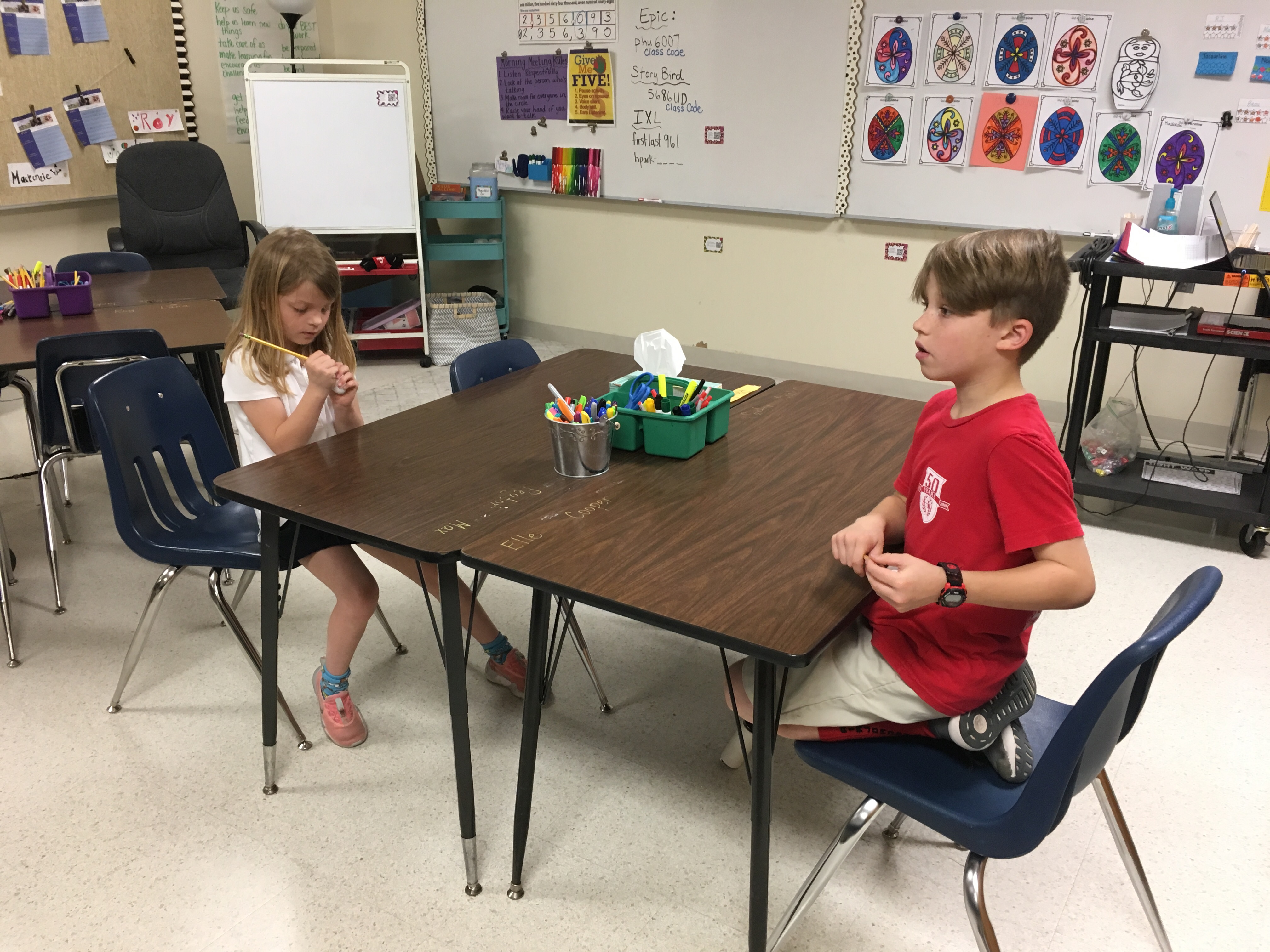 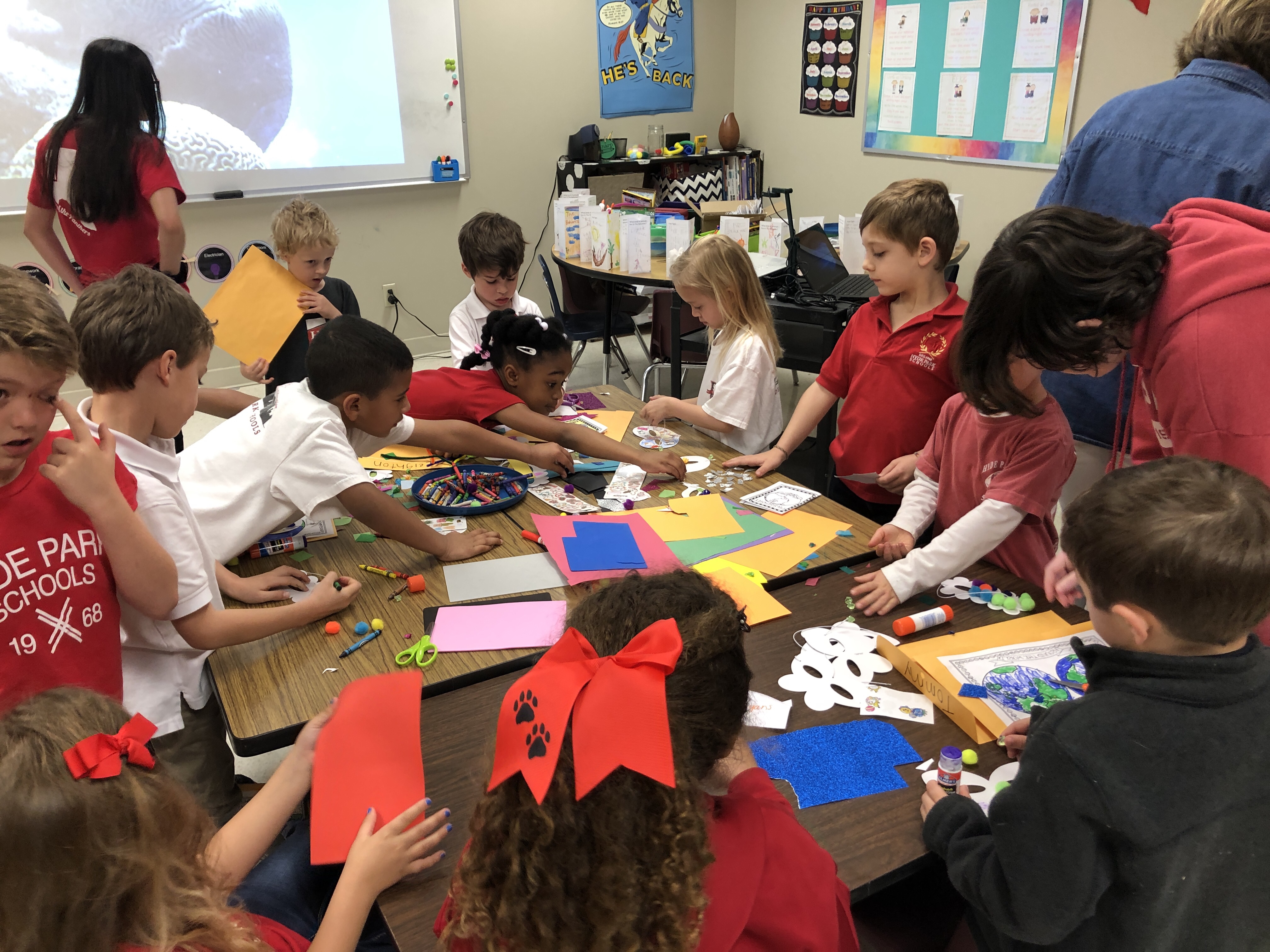 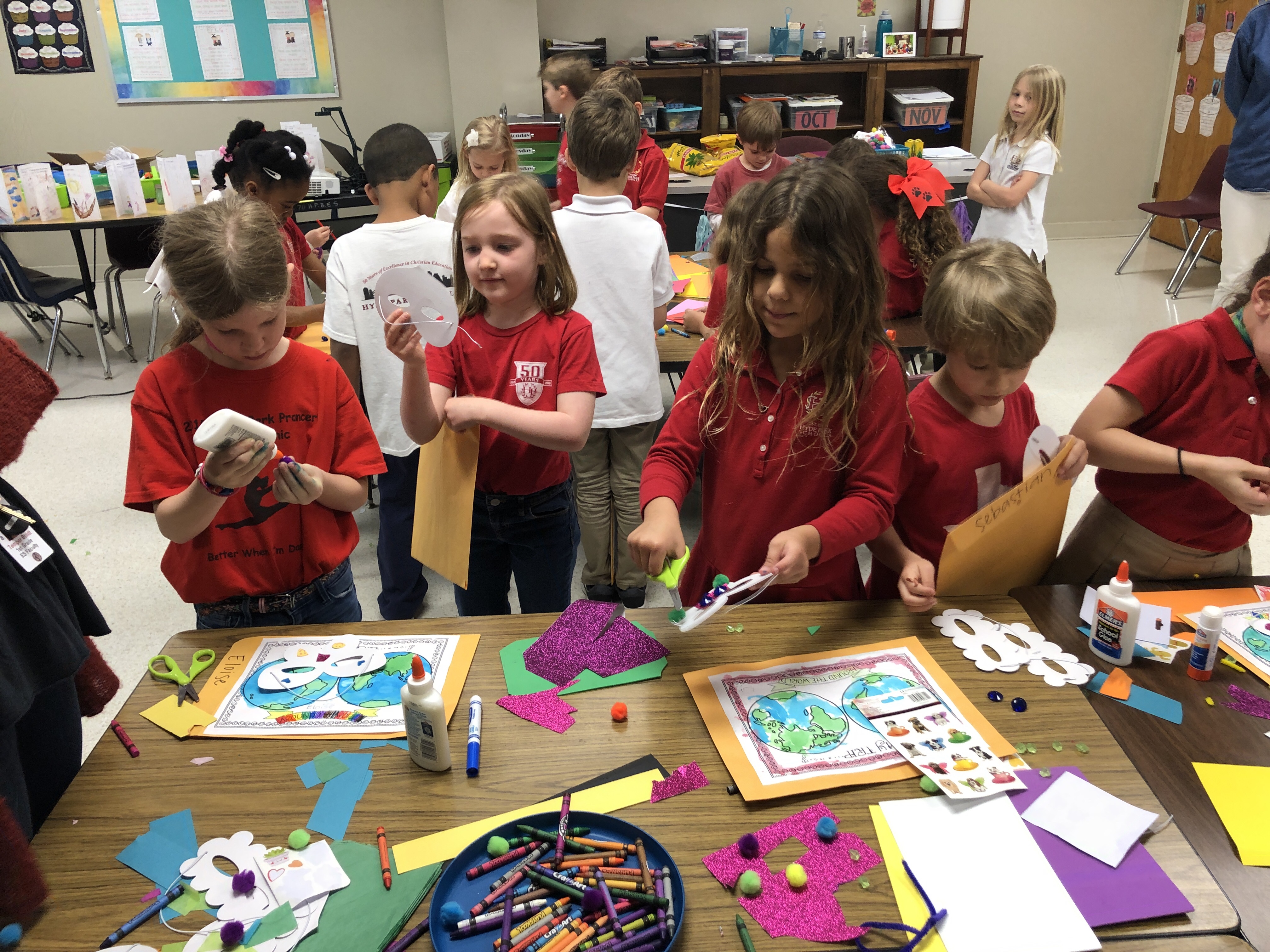 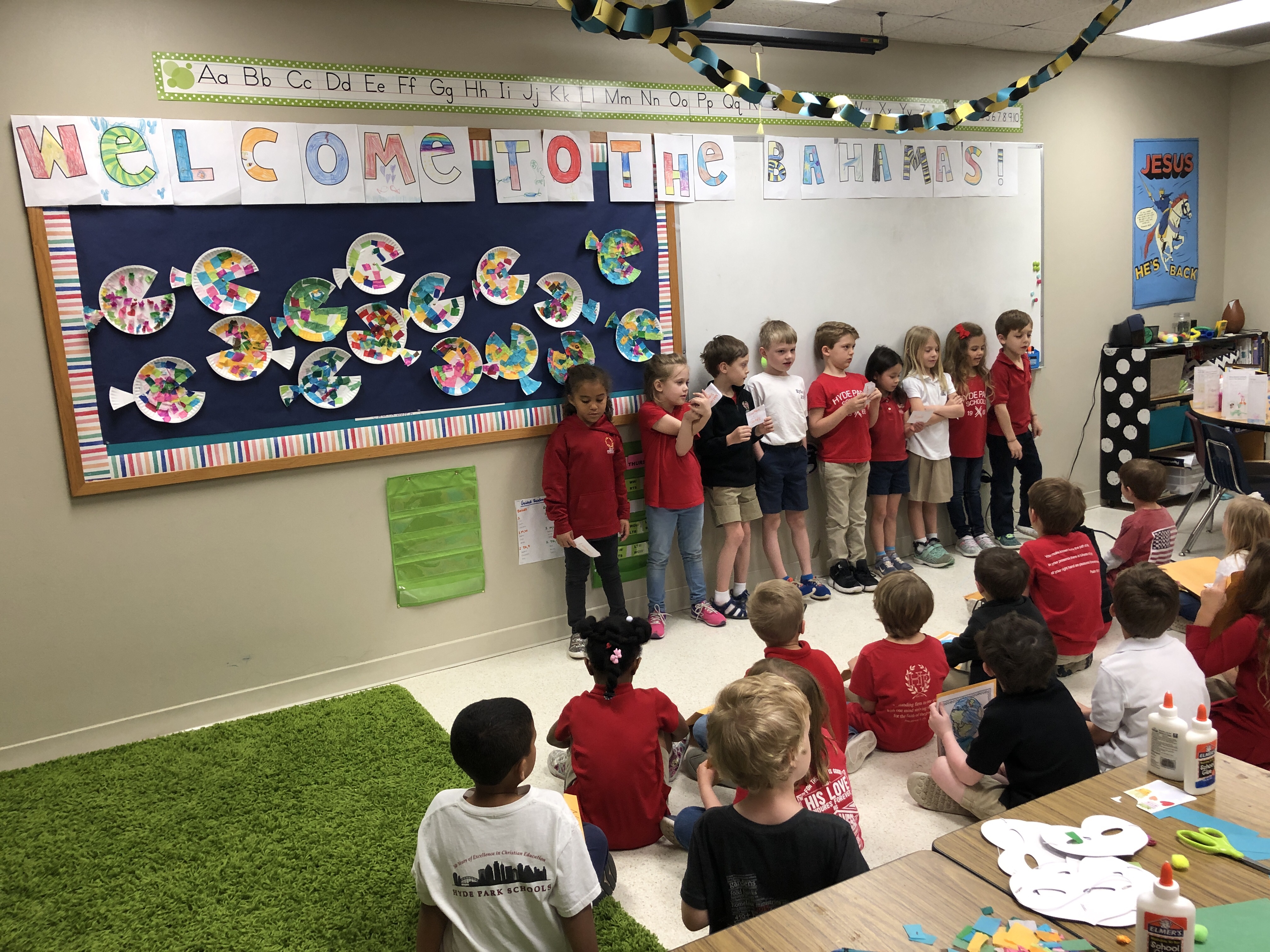 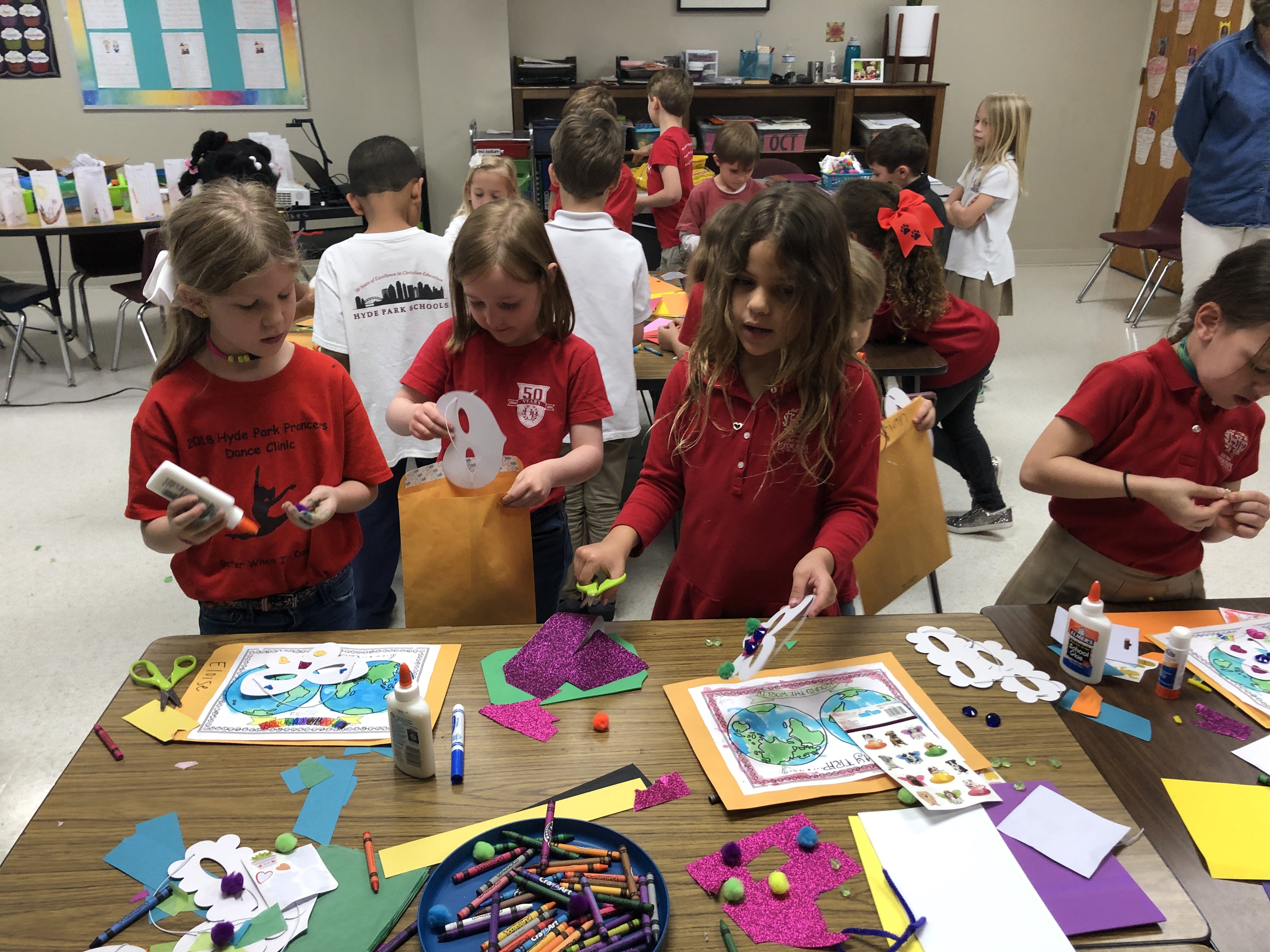 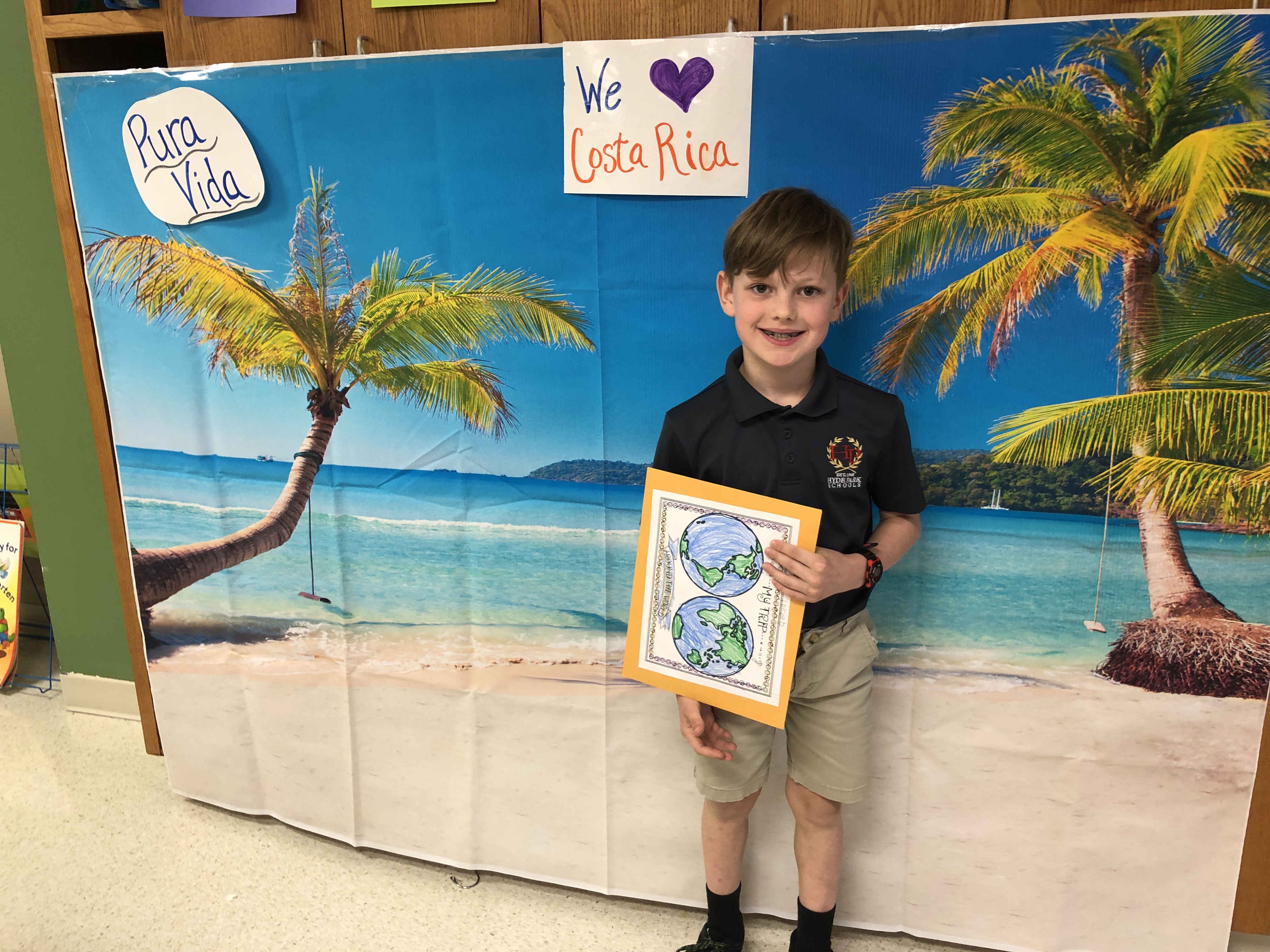 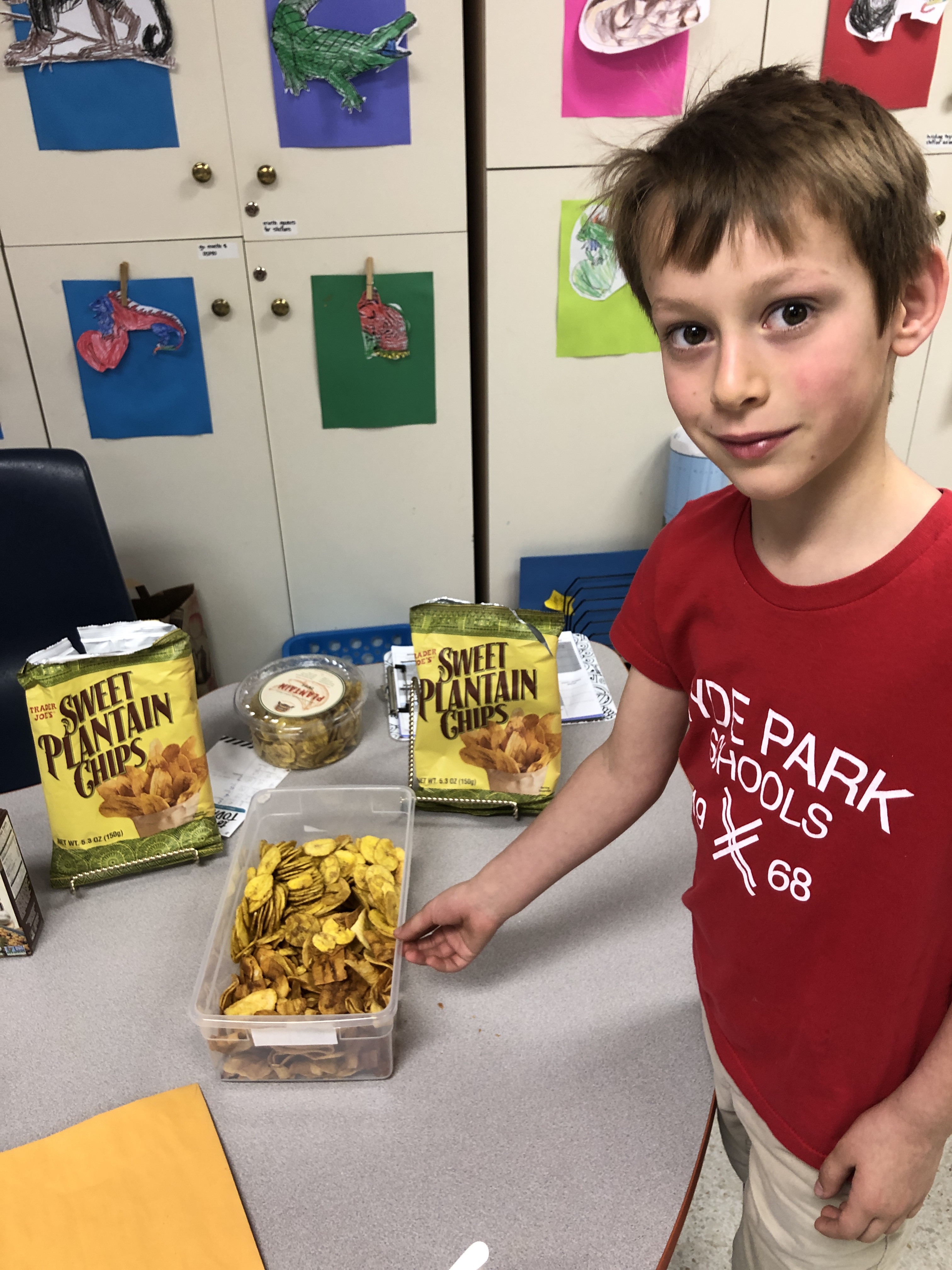 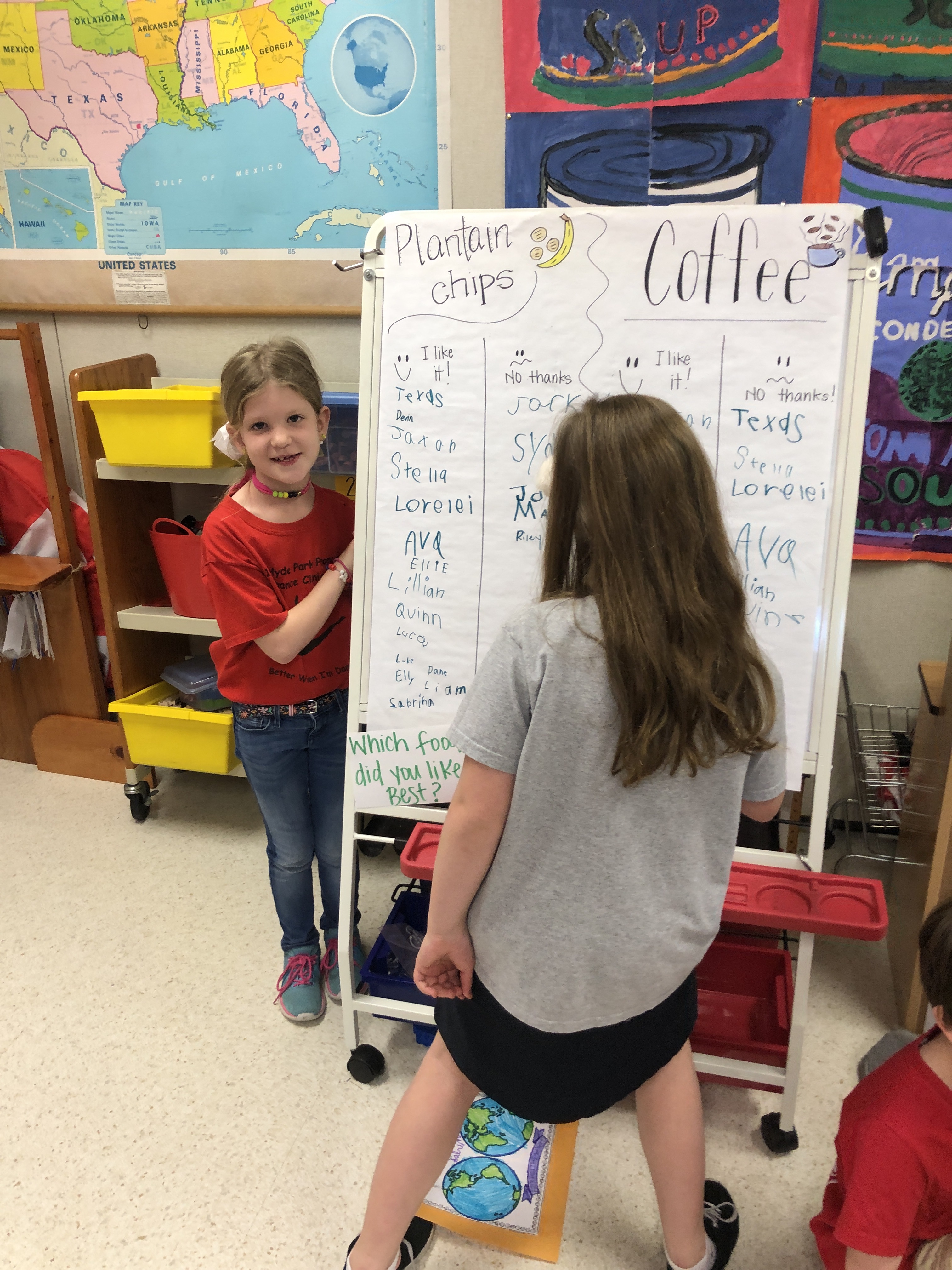 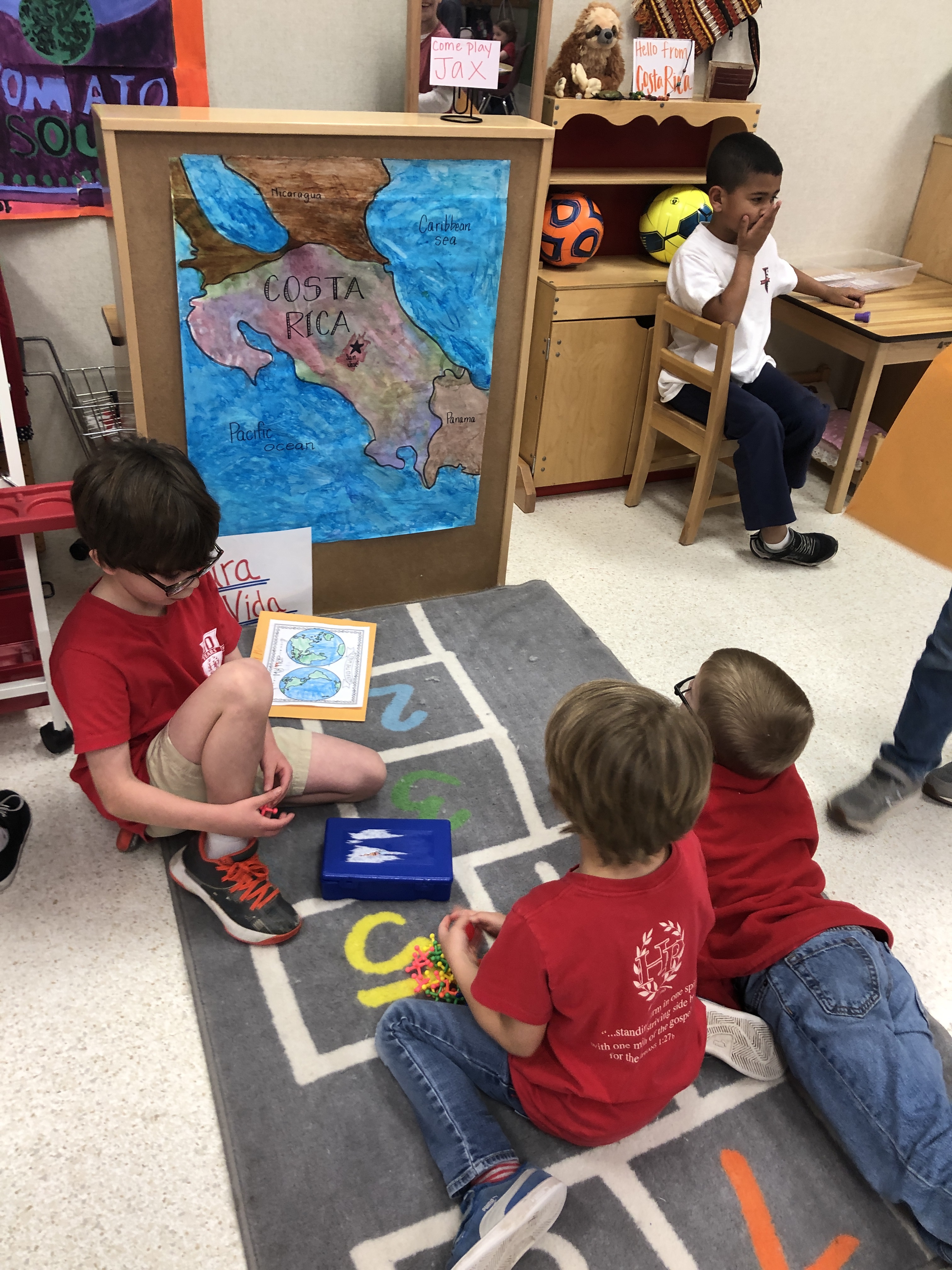 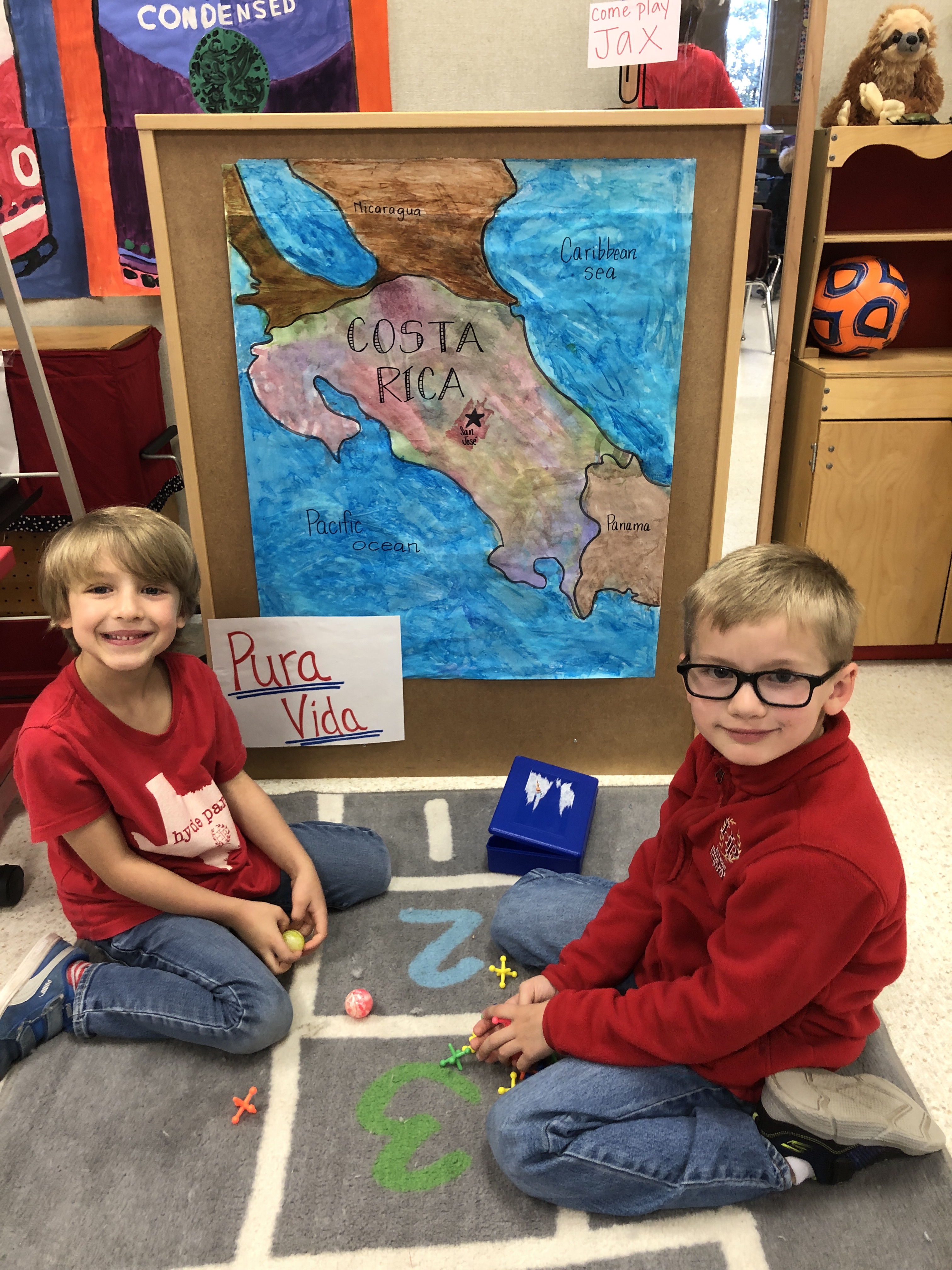 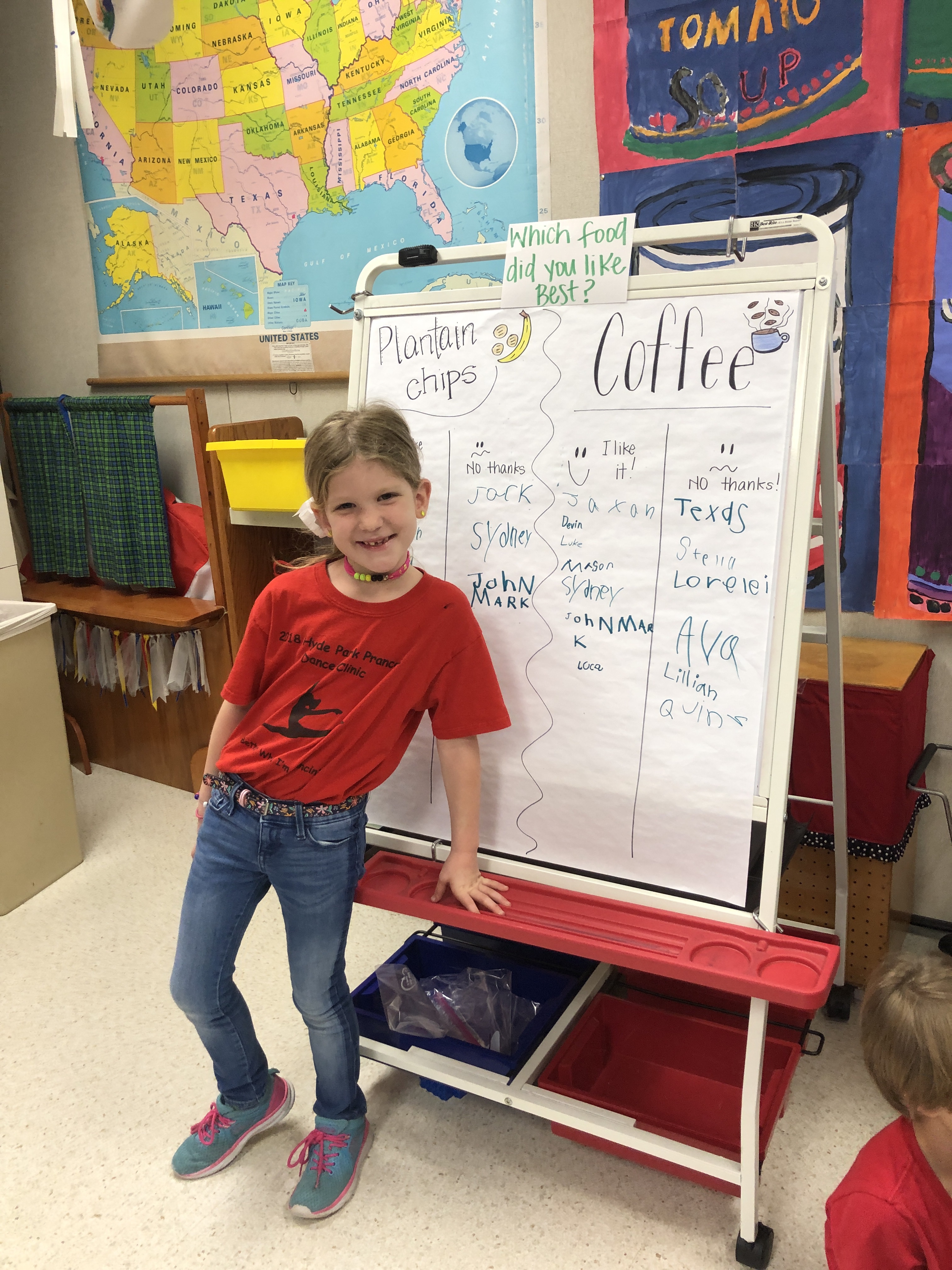 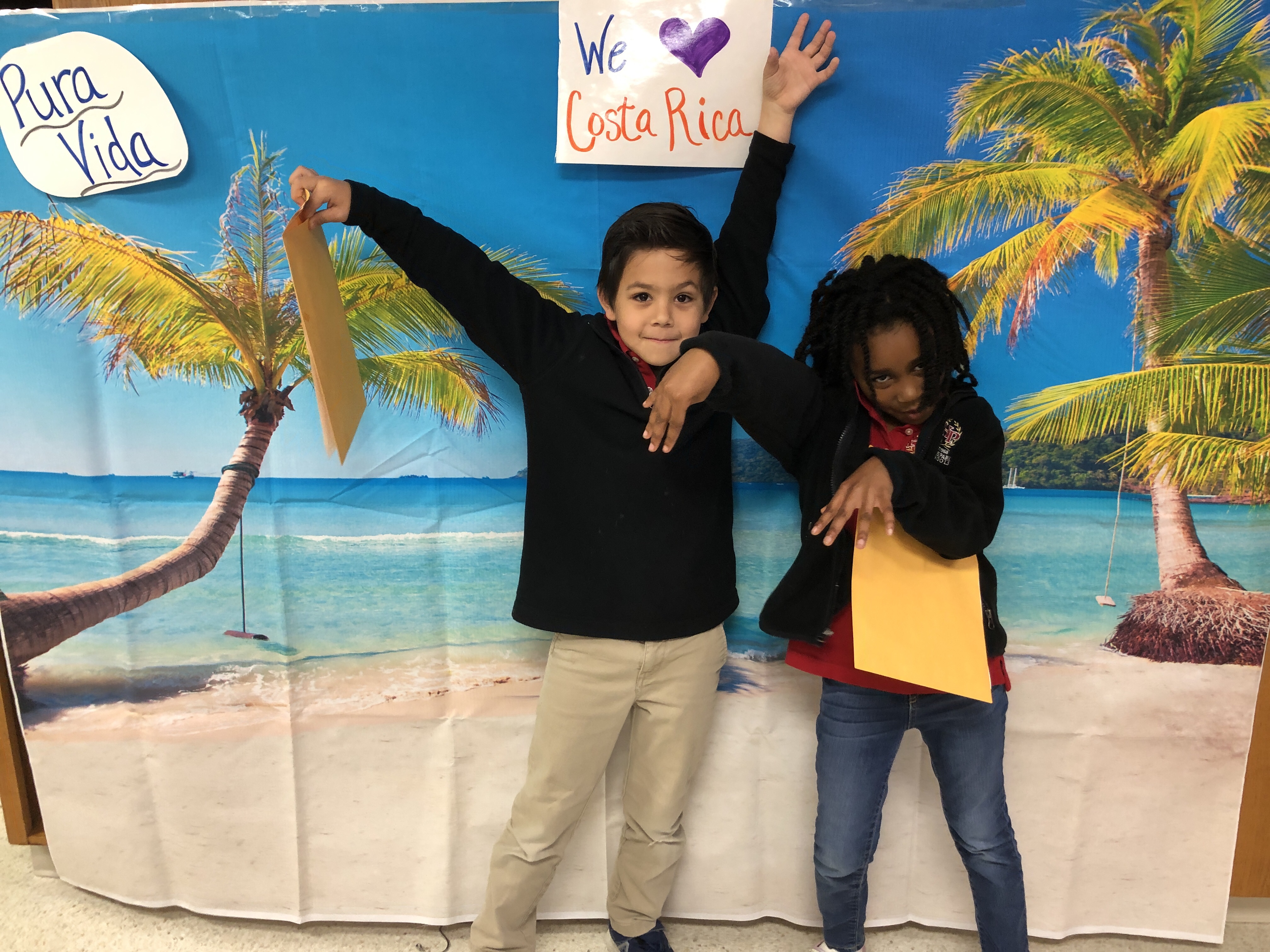 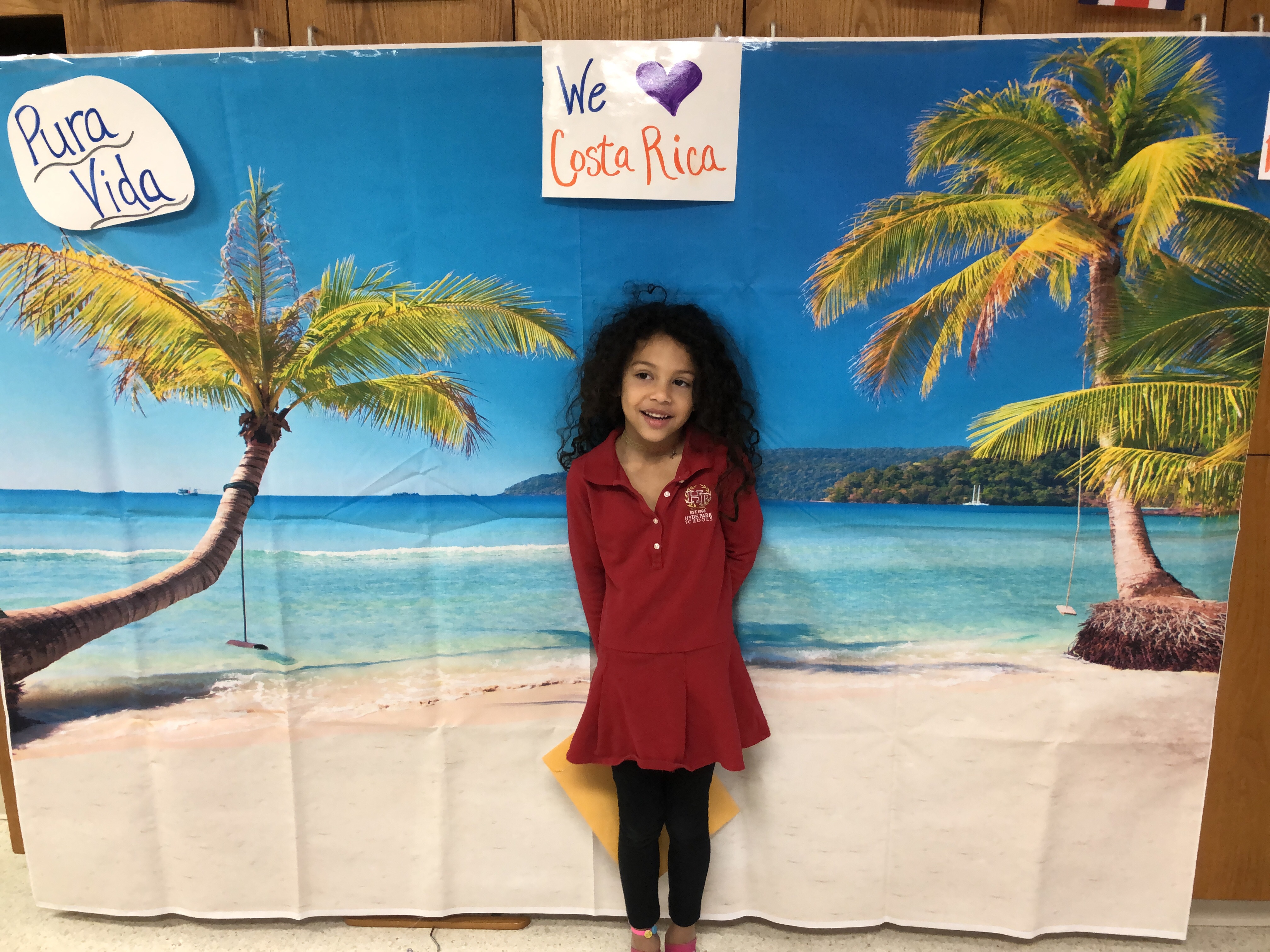 We DID: the CULTURAL FAIR! Students both lead and explored classroom created ehibits of the countries that our High School Teams are currently at. Kinder recreated COSTA RICA giving 4k-2nd grade tates of plantain chips, smells of coffee beans, sounds of ocean waves and sights of tropical animals!

We FELT: PROUD to step into the roles of the teachers and allow the other classes a chance to learna nd experience Costa Rica!

Please PRAY: That God would open the minds and hearts of these children in appreciation for other cultures and traditions. That these seeds would be planted and take root into hearts of faithful follows of Christ to reach the Nations!

As the week is concluding, we feel practically inseparable with the kids.

It has been a privilege this week to serve Pillow with my friends and I feel very thankful of this experience. I have been shown so much love by the children and truly feel very blessed. 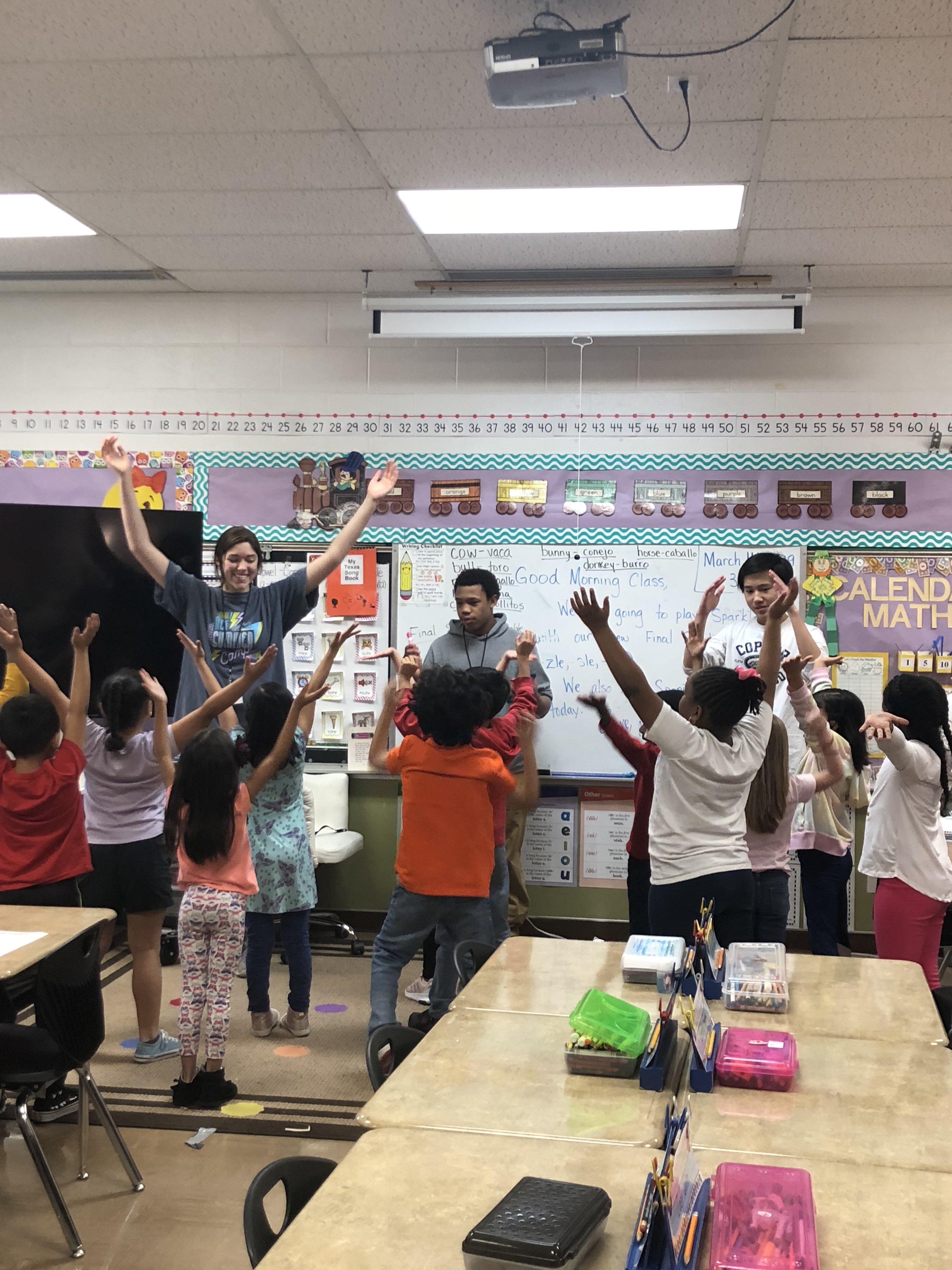 Today we continued to decorate the halls in preparation of field day. Some students came up with class cheers that they will perform tomorrow. The Pillow students are practicing these cheers with much joy and can’t wait to show their peers. 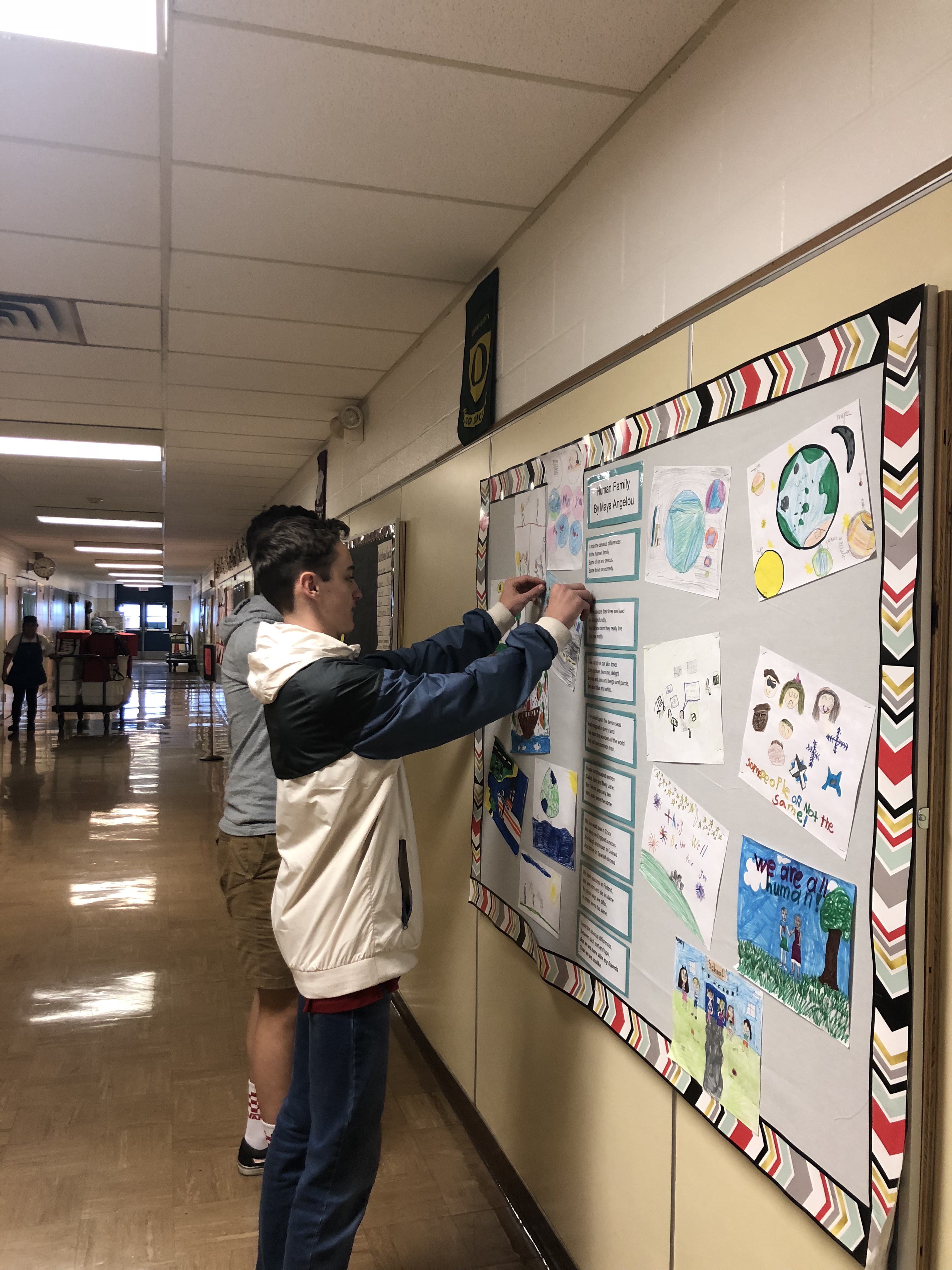 In first grade we gave the students a spelling test and a math quiz. Jared, Josh, and I were also given timed math quizzes to take with the students. Jared and Josh both got one hundred percent, but sadly I couldn’t even come close to the first graders scores. ( With my failure I received hugs from every kid in that class and felt very encouraged) 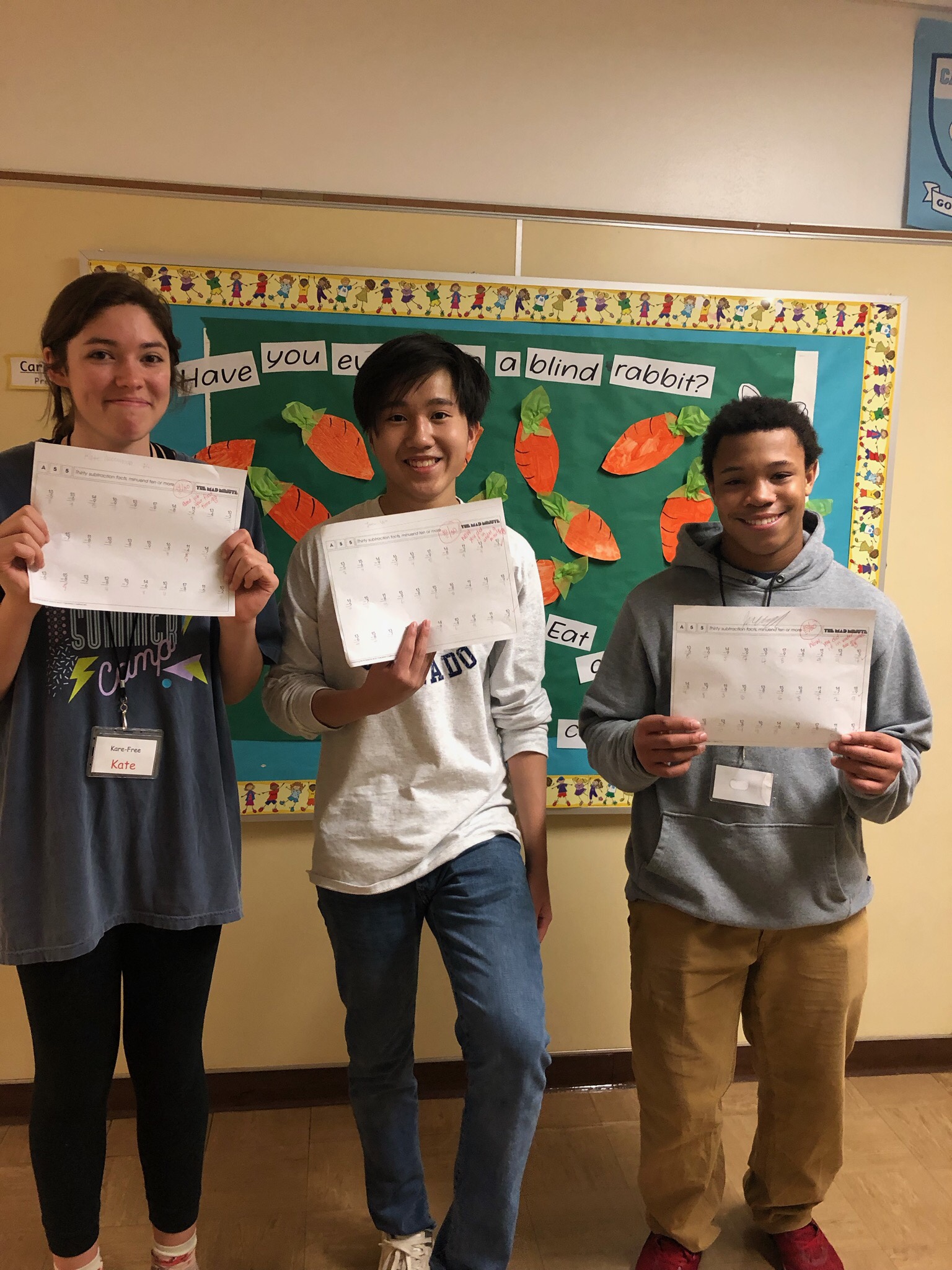 During recess today, some Hyde Park students played another riveting basketball game, and played games with the kids.

We left Pillow ready for our next adventure which just so happened to be Chili’s. Everyone ordered food and we chowed down after our long day of work and play. 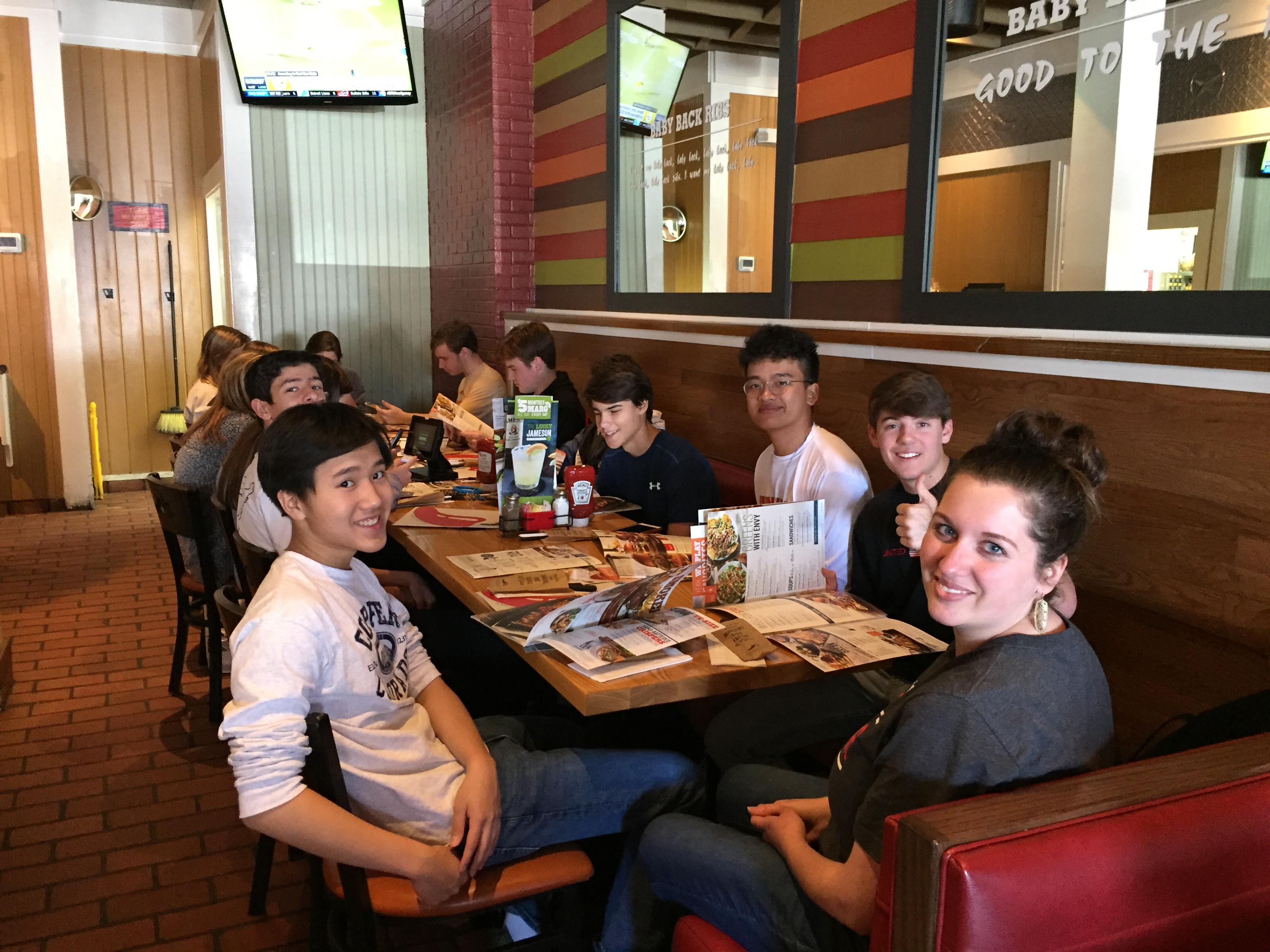 We are looking forward to field day tomorrow, but we are also sad that the week is coming to a close.